I really try to like colors that aren’t a shade of blue or green. Honest, I do. I bought a coral/pink candle holder from Target a few weeks ago on clearance that I thought would add a nice pop of color to my living room. 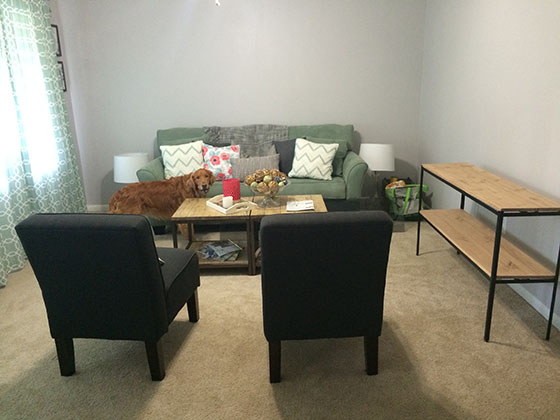 You can see it on the table, pulling the same color from my poppy pillow on the couch. 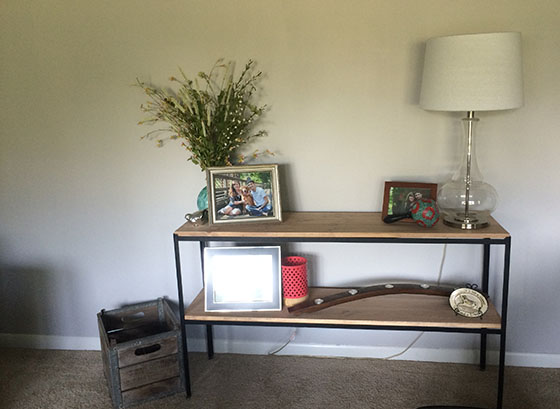 And again on my console table pulling out the color in the maraca I brought back from our honeymoon.

I like the coral color on both of those pieces, but I hate it on the calendar. Seriously, it is awful. Every time I walk by our living room it jumps out at me. “Ha ha, there’s ugly pink in your rooooooom.” 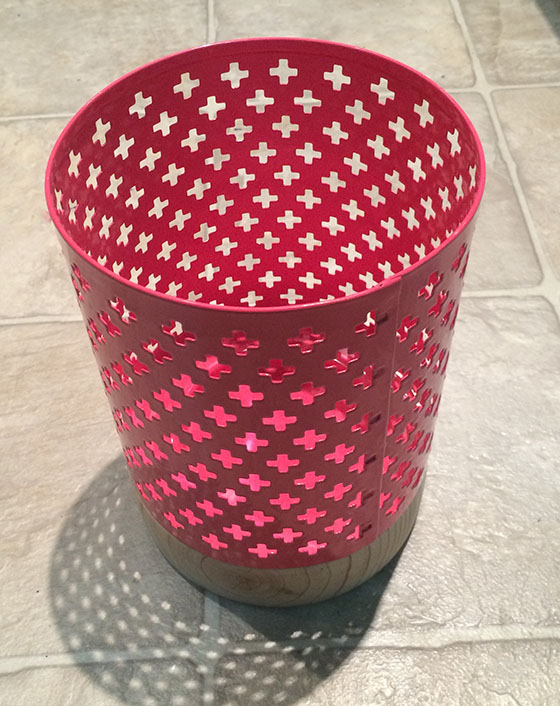 I didn’t want to return the piece since I paid $5. It was a good price and I liked the overall look, just not the hideous color. I taped off the wooden based and, for good measure, a stripe to remain coral.

Then I rushed outside to spray paint the whole thing. 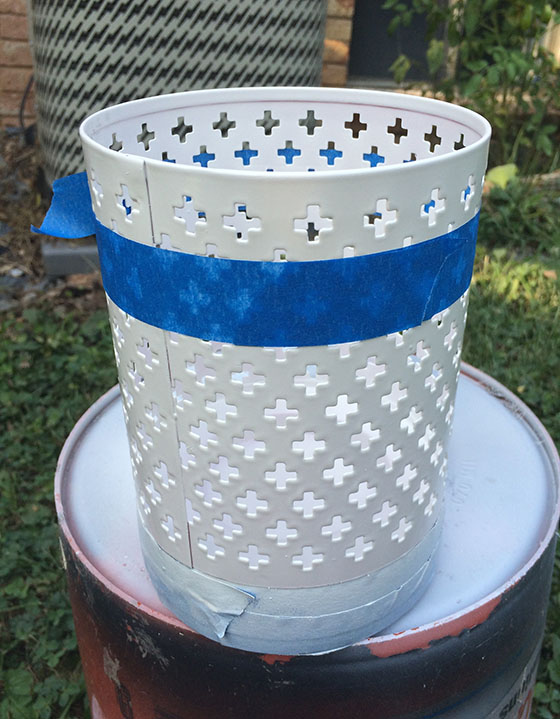 Ahhhh, so much better already.

Once the white dried, I pulled off the tape… and still hated the coral. So I sanded down the line left from the paint and did the entire thing in white. I liked it, but thought it needed something special. Something extra. 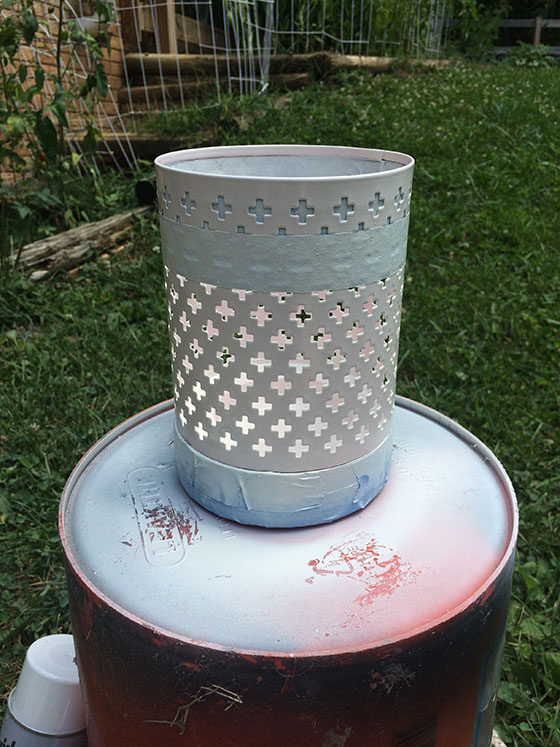 So of course I added mint to it. I can’t help it… I just love mint green. And aqua and teal and blue and green.

I then slapped a light stain on the wood base! 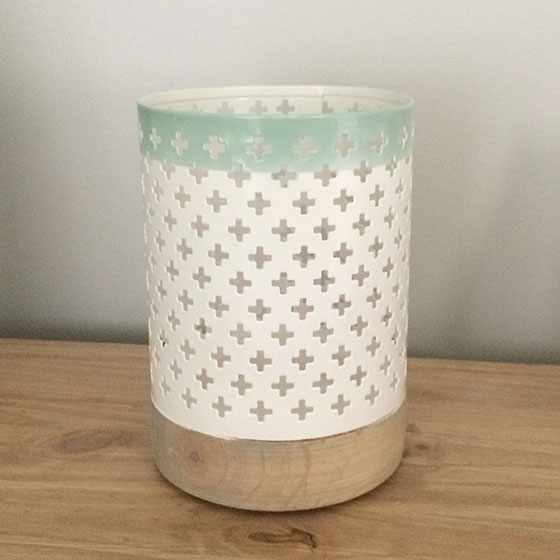 It looks so much better (to me anyway). And now it looks right at home on my new console table. 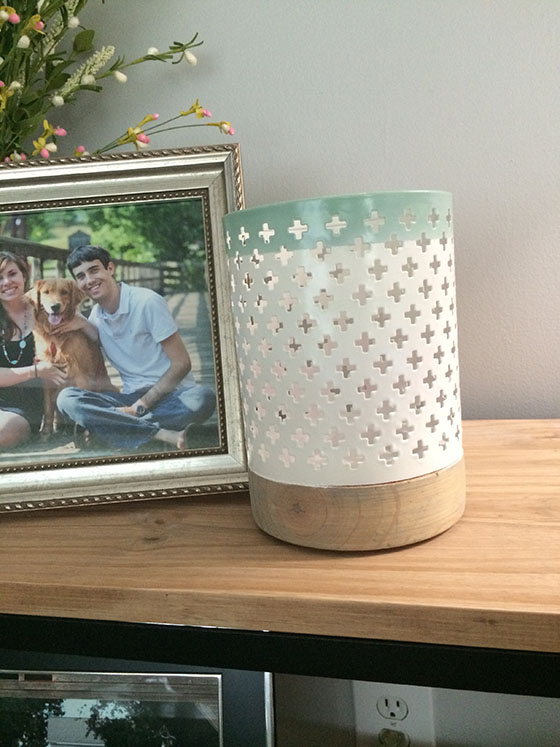 No more ugly pink staring at me in the room. I can breathe a sign of relief. 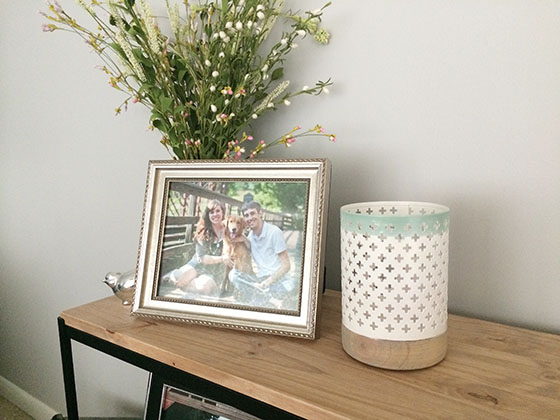 So what do you think? Better before or after? If you are pink people, then you probably think I’m nutso. It was a cool piece to begin with. But if you are like me and coral pink makes you want to tear at your eyes, the after is much better.

I mentioned in my post yesterday that one of my areas of focus for my living room is adding punches of color. I have set my sights on finding the perfect pillows for my mint couch that aren’t just some shade of mint or gray. It’s been a challenge because the mint couch has a dingy gray tone to it that is incredibly noticeable when next to bright fabrics.

I spent some time in Photoshop to try to get a better feel for how some of these pillows will actually look against the couch. Here’s what I came up with:

Option 1 pulls in some navy, green and coral. I love the poppy pillow and I think it will look really nice with the mint and teal chevron pillows I already have on the couch. I also like that the base of the pillow is white, so they are bright. I love the navy pillows, but since I am trying to brighten the space I think I’ll stay away from these for now. 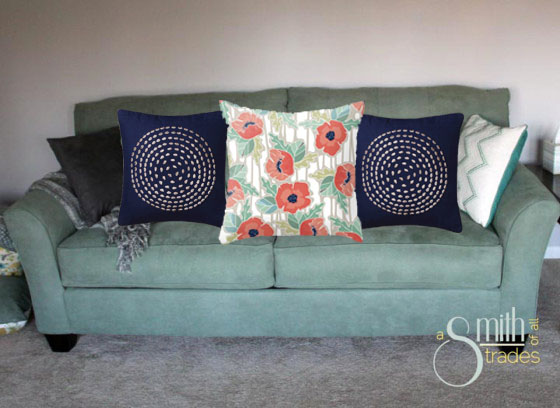 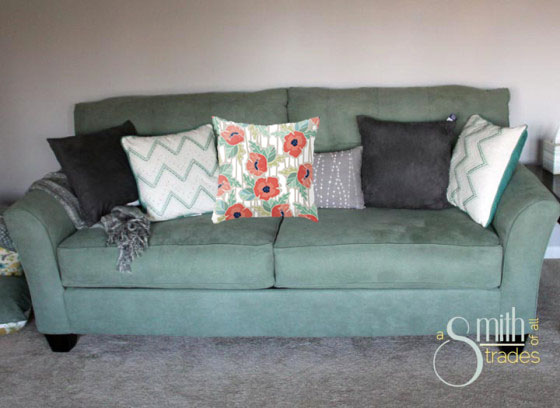 Option 3 adds in a pillow with no mint or teal at all. *Gasp* And I like it! I like that both accent pillows have flowers, but not in the same way. 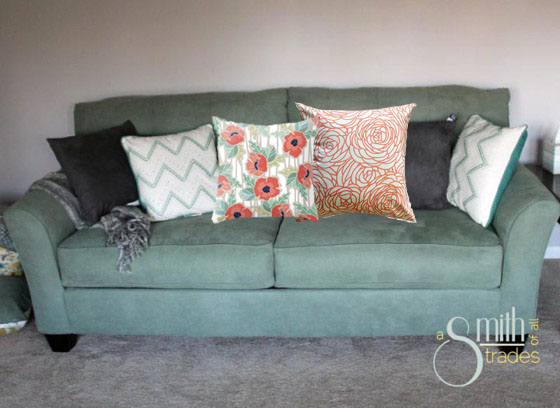 Here’s a bunch of the other pillows I “tried” on the couch. I love each of them, but not on the couch (and certainly not together). The pillow in the center is the one I was originally going to purchase, but once I “tried” it on the couch, I’m not so crazy about it anymore. Glad I pillow tested. 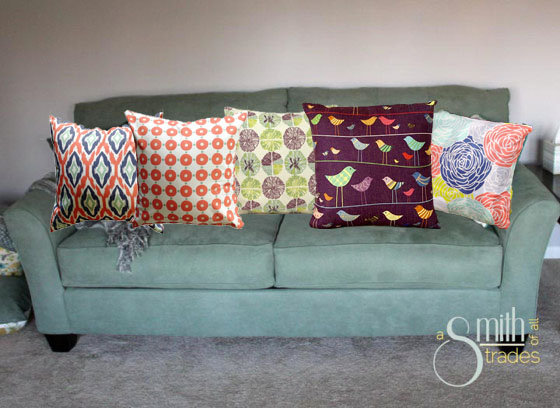 My last option is buying two of the poppy pillow. I think I’m going to buy just one first (it comes in many different sizes from this Etsy shop) to make sure I like it in person. If that works out, I might add additional pillows. 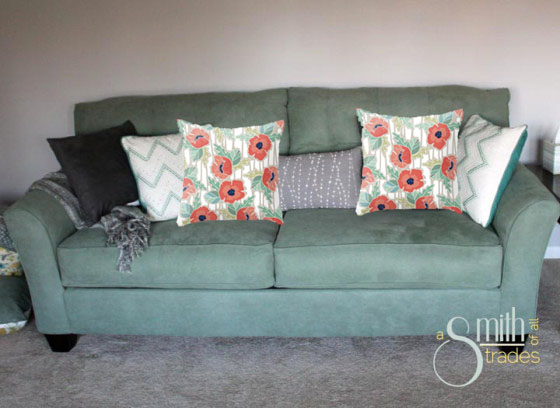 As silly as it seems, I actually think having the coral on the couch is going to change the room a lot. If I learned anything from my class, it’s that color can make or break a room. Time to get my colors just right!

I hope you all had a merry Christmas and a wonderful New Years! I’ve been off work for three whole weeks and it has been amazing! You might think I would update my blog more since I had a lot of time off, but I’ve been happily hanging out with my family and friends instead of doing work of any kind! That’s not to say I didn’t craft on my three-week staycation. Stay tuned for a bunch of new projects that I’ve been working on!

Today’s project couldn’t be easier to make. And yes, if you read the title of the post, it is a lamp!

I was browsing around at Michaels a couple of months ago and I found two beautiful green glass jugs on clearance for around $3 a piece. I knew right then and there that I wanted to turn them into a set of lamps for our night stands. You see, ever since B and I have lived together (oh, 4+ years), he’s had a lamp and I haven’t. Or at least that’s how I remember it. I definitely have had one since we moved to our house.

I’ve wanted to buy a matching set but they are SO EXPENSIVE. So when I saw these jugs I knew I already had the perfect tools to turn them into lamps.

Even longer ago — sheesh, probably two years ago — I bought a kit on Amazon to turn a wine bottle into a lamp. After I bought the kit I decided that a wine bottle makes for an awkward lamp, but I saved the kit for later. Perfectly enough, the clearance jugs had an opening and a neck as skinny as a wine bottle! So making my lamp was as easy as plugging the kit into the opening of the bottle. I thought I might have to seal it with glue, but the cork is in the neck of the jug very tightly. 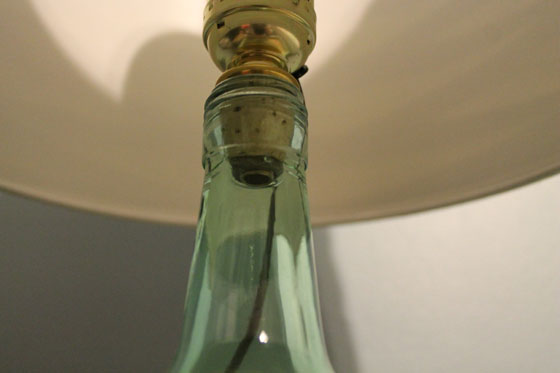 You can see the cork in the neck of the bottle in the above photo. For a better photo, or to buy your own, check out this listing on Amazon. I definitely don’t think I paid $20 for a set of two. I think I paid closer to $10…. so maybe shop around?

Anyway, I made two lamps in two minutes. The hard part? Finding shades! See, the jugs aren’t huge, so a normal shade would be too big. And then I found one at Target I loved, but they only had one. I held onto the one for about a month before giving up on finding its mate. I returned my favorite shade, then found a set of two a couple of weeks later. SCORE!

Here’s how the lamps turned out: 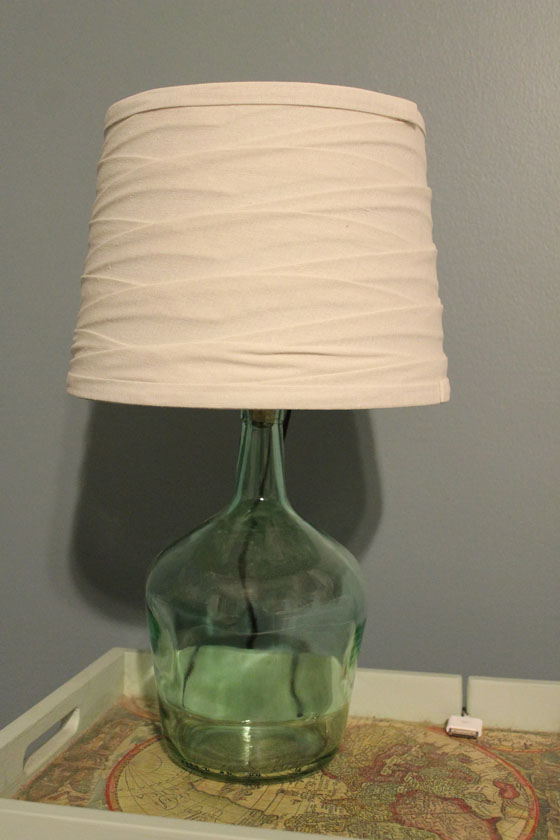 The only downside to the kit is that the cord runs out at the fixture instead of through the lamp, but I love them regardless. 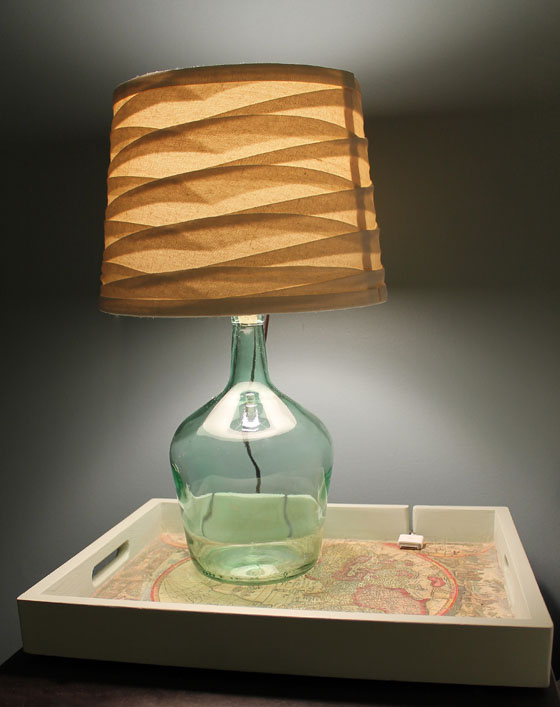 And now I finally have a lamp to go in my nightstand. Merry Christmas and Happy New Year to me, amiright?

Hope you are all doing well in 2014! It’s back to work tomorrow and back to more diligent blogging. Getting back into the groove will be rough, but normal will be a nice change.