It would be an understatement to say that I love my fireplace. It has quickly become one of my favorite things about our house — I cannot believe how well it turned out! Glen did a marvelous job of creating a simple mantel for our brick fireplace, and it is truly perfect!

I still have to paint it, which I plan on doing this weekend, but isn’t it just awesome?!?

The fireplace has come so far, and I have to say that I’m rather proud of our design choices. Remember what it looked like before? It used to be smooshed against the wall of our fourth bedroom, suffocated by paneling and surrounded by a massively round hearth . Really, it was just altogether unsightly.

Now it’s the centerpiece of the room again, as it should have been. I’d say we’ve made quite an improvement. The trim at the top looks splendid and the mantel is going to match nicely once it’s white. It’s also placed at a normal height (the old mantel was about a foot higher… weird) and extends to the edge of the brick.

It looks so charming with our wedding photos on it, too! ❤

Instead of buying a pre-fab mantel at Home Depot or Lowe’s that would have been a lot fancier, I had Glen make the mantel out of two simple wooden supports, two pieces of wood (he glued them together to form the thicker shelf), and a piece of trim. It saved me about $200, and it really does compliment the simplicity of the fireplace and the simplicity of the room.

Once I paint the mantel, the only thing left to do will be to eventually replace the doors with something more modern. The brass is rather dated, but it works for now!

We get our couch this afternoon, so check back for pictures of the room with furniture in it!

Our granite is finally finished! It took an extra week for the place we ordered from to get us our 5-foot piece of granite cut and polished. Since I picked from a warehouse of remnants, it was a little tough to see the exact color I was picking. The color I chose was called UbaTuba, which looked completely black with a few gold specs in it. Our granite has a little more green in it than I was anticipating, but I think it’s going to look really nice as our hearth. It weighs about 130 lbs. Wowzer.

In other home improvement news, the hubby and I finally ordered blinds! ** Hallelujah** Privacy is going to be nice. We used JustBlinds.com, so we measure, they create, we install. It cost a little less than $500 to do the entire first floor of windows, minus our bay window. We’re not sure what we want to do with that one yet.

Our blind order included a set for our master bathroom, but not for the window in our guest bathroom shower. Instead we used a window film to add a frosted effect to the glass. Now you can’t see into the window and there aren’t bulky blinds in the way of your showering.

We bought the application kit as well for another $9.

The film was easy to install on the window. It took us about 10 minutes to do both panes. And we have a ton of it left, too. I am toying with the idea of using this film in our downstairs bathroom as well. 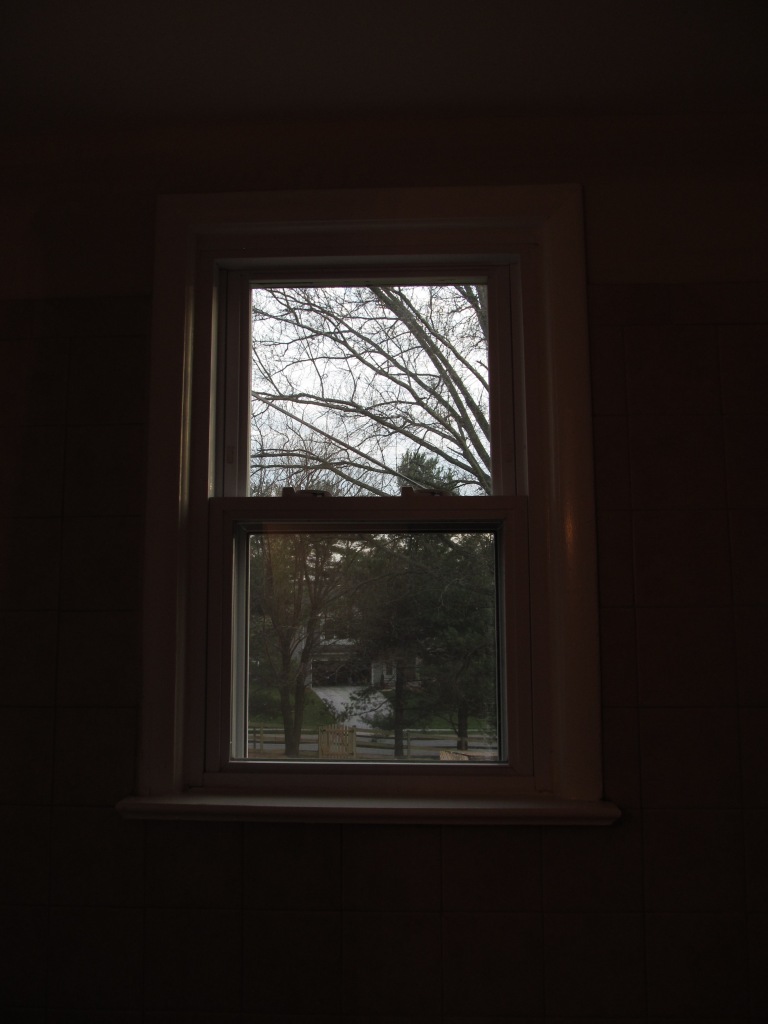 And you don’t really notice it from the outside, which is nice.

This was the perfect solution for this window, fo sho.

My last exciting piece of new is that Glen surprised us by removing the molding in the family room (that wasn’t the surprise) and using it to fix some busted molding in our kitchen. Our whole house has clamshell molding, but in our pass-through window into the kitchen and around the door frame of the kitchen, the molding was messed up or different from the rest of the house. Glen removed the downstairs molding without breaking it and reframed out the doorway of our kitchen, the baseboard and the pass-through window. Now all of our trim matches! He is awesome.