After running around like crazy people last night doing some long-overdue grocery shopping and a Costco run, we finally made it to Lowe’s to pick up our new doors! Who wants to see some terrible photos of our doors? Hopefully you do.

I totally sissied out yesterday when it came to carrying them into the house, but we got them in and laid them on our floor. They are rather… beige. But that’s just for now! I am nervous that they will look too fancy on our Plain Jane house, but I am also fabulous at second-guessing my decisions when it comes to things I cannot return. *gulp* 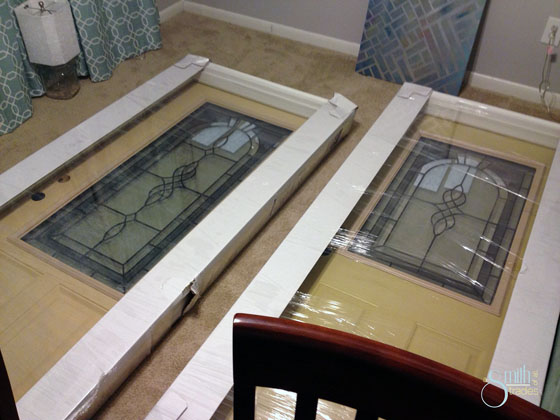 The door on the left will be our front door, and the other will replace our crummy car port door.

I was a little nervous about leaving them ont he floor because of the pup, so I made a door cage out of chairs to keep Rem out.

On to the swatches! I am loving the idea of a teal front door. I think the mint will get lost in the whiteness of our house, so a bolder pop of color is in order. I also like the vibrant blue. The hubby also likes the blue and hates the teal… so I should be nice and go with that. But I make no promises.

Sometimes a girl just needs a teal front door! And even though my hubby doesn’t quite believe it, I can always repaint the door if we hate it. 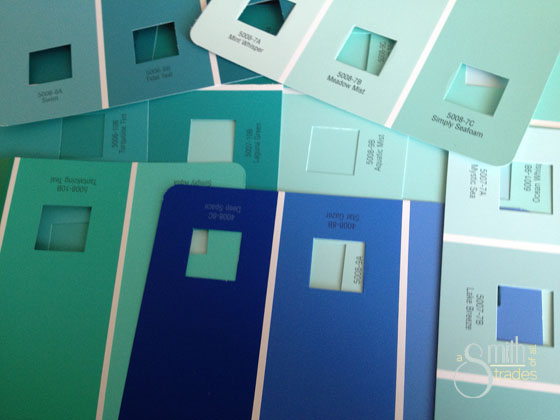 Those were some quality photos, huh?

Hope you enjoyed. I have no idea when we’ll get a chance to hang them, but you’ll be the first to know once I know!