My daughter is a lucky girl. She is so loved by our family and our friends and you can feel it in her nursery. Her walls are adorned with pieces of art that loved ones have made for her. It warms my soul.

Our friend Kate just painted a sweet flamingo painting for her, so I made an impromptu frame for it (if you can call it that).

I found a piece of scrap wood in our basement and cut it down to size with a jigsaw. Then, I sanded down the edges.

After centering the painting on the wood, I tacked it down with, yes, tacks.

Then I drilled two holes for twine so I could hang the frame on the wall. It was a quick and easy way to display her beautiful new piece of art.

Check out some of Kate’s other beautiful artwork.

My coworker Rachel gets married a month from today, and yesterday we threw her a surprise bridal shower at work. I was in charge of gifts. I also had to make an umbrella light to tie in with the shower theme. My other coworker found the idea on Pinterest and showed us at a secret shower planning meeting. Another coworker even had the busted umbrella.

I’m embarrassed to admit that even though I’ve been blogging for more than a year now and totally know how this whole before and after thing works, I TOTALLY forgot to take a picture of just the light. I was too excited about the surprising.

Anyway, to make your own umbrella light, you need an umbrella. And lights.

Carefully remove all of the fabric from your umbrella so it’s naked and rather dangerous-looking.

Spray paint the heck out of your umbrella. I went with white because my lights had a white cord.

Let your umbrella dry and touch up any spots that didn’t get adequate coverage. Be careful because those spokes can be dangerous!

Next, wrap your umbrella with lights however you please! You can see the light hanging from the ceiling in the upper right corner of the photo.

And again, in the middle of the photo. 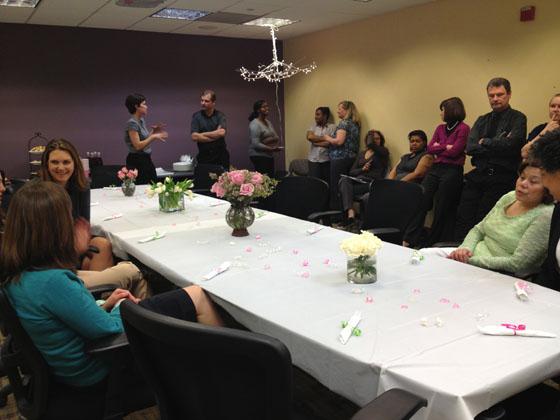 I think it would look even cuter in a rustic sort of setting and not a stuff conference room.

Rachel loves chocolate, so we had a ton of chocolate goodies: Fondue, brownies, mousse…. we even had Dana (Little King’s Confections) make a chocolate cake with strawberry filling. How pretty?!

Rachel was DEFINITELY surprised — especially since she thought she was wayyyyy late for a staff meeting.

Rookie move not getting a picture of the light by itself, but here’s another photo of the light, the cake and the bride-to-be.

Congrats, Rachel! Glad we were able to totally surprise you 🙂

So… I really don’t know what washi tape is but it is apparently a huge deal. Apparently. It’s just colorful tape, but I guess that’s cool.

Anyway, I was perusing the aisles of le Target last week and I stumbled upon a roll of Scotch tape that was mint colored and patterned! So, it’s not washi tape… but it’s some kind of tape! It was mint, so I needed it. I scooped it into my basket and went home.

It wasn’t until 1 a.m. that I knew what I wanted to do with my tape. I was staring at a our framed family tree, which has been missing something ever since I framed it. I got a document frame from Michaels and printed the family tree on our printer, but our printer couldn’t print full bleed (all the way to the edges) so there’s always been a white border around the image.

So I took the frame off the wall so I could make a faux mat out of my new roll of mint tape. 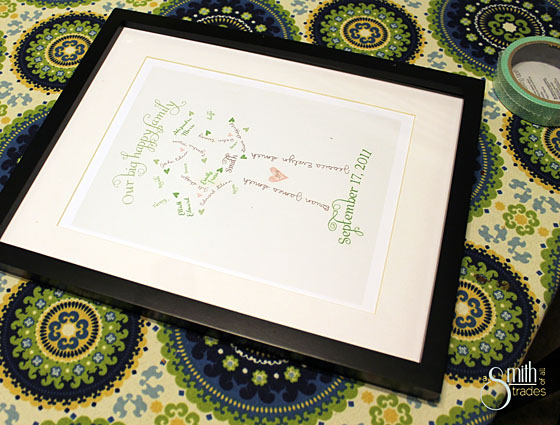 Making this mat was really easy. I mean realllly easy.

Pop the image out of the frame and start adding the tape around the edges. I taped right onto the family tree and onto the white piece of paper that came with the frame. 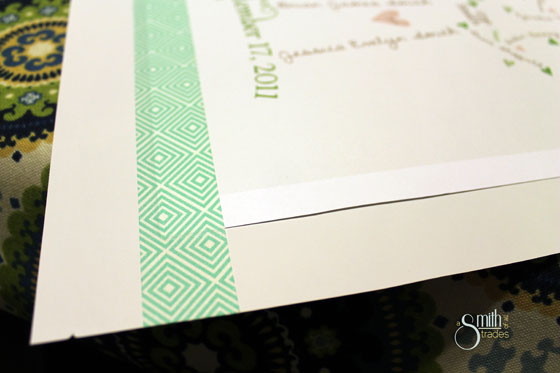 I did the top and bottom first, then taped along the vertical edges. That way the corners overlap in the same manner. 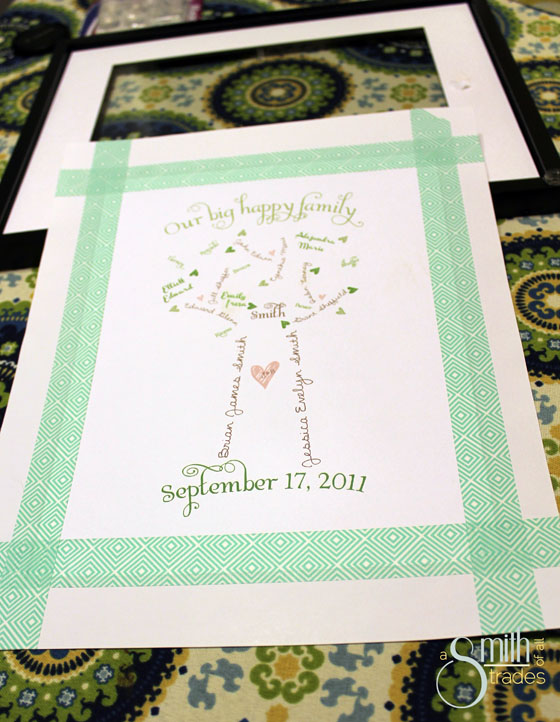 I popped the newly “matted” piece of artwork back into the frame. Unfortunately, I taped it a little off center. Dang! I trimmed the edge of the white paper and popped it back in — done!

It pops out of the frame now and I love it even more!! It also looks lovely next to our new curtains.

So, next time you need one of your piece of art to pop, just add some funky tape… washi, Scotch… whatever!