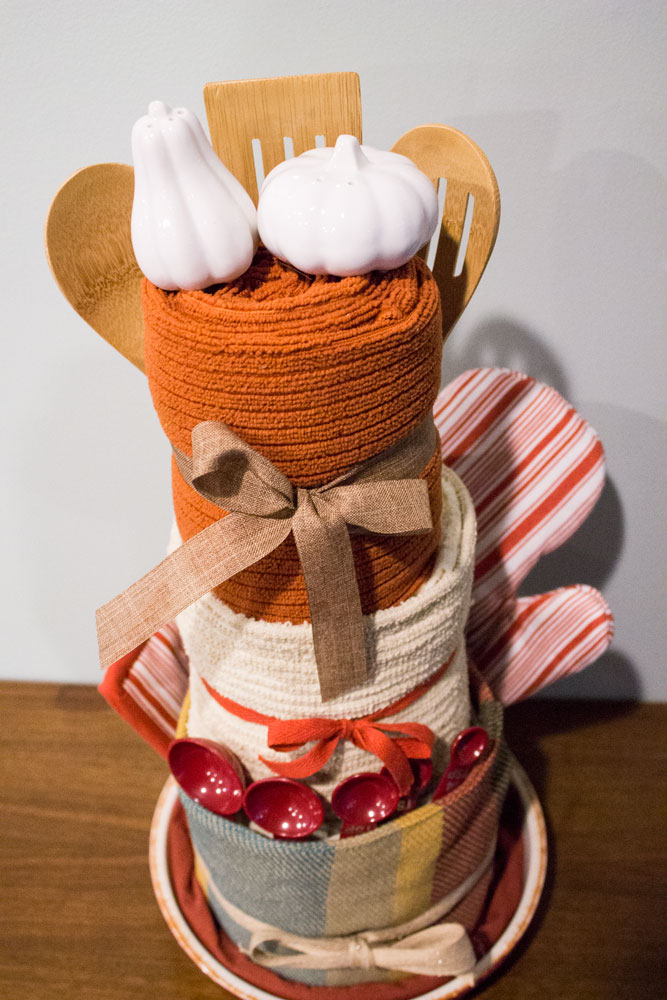 While pinning the heck out of some awesome fall bridal shower ideas I stumbled across a cute idea to do a version of a Diaper Cake with kitchen towels and other utensil. If you want to see the original, here was my inspiration.

I went to Home Goods, Target and Amazon for my supplies:

I bought what I thought I needed, returned the extra sets I didn’t use, and gifted Dana a bag for the odds and ends that didn’t work. Depending on the size you’d like your cake to be or the size of your pie plate (which the cake sits in), you’ll need varying amounts of each. 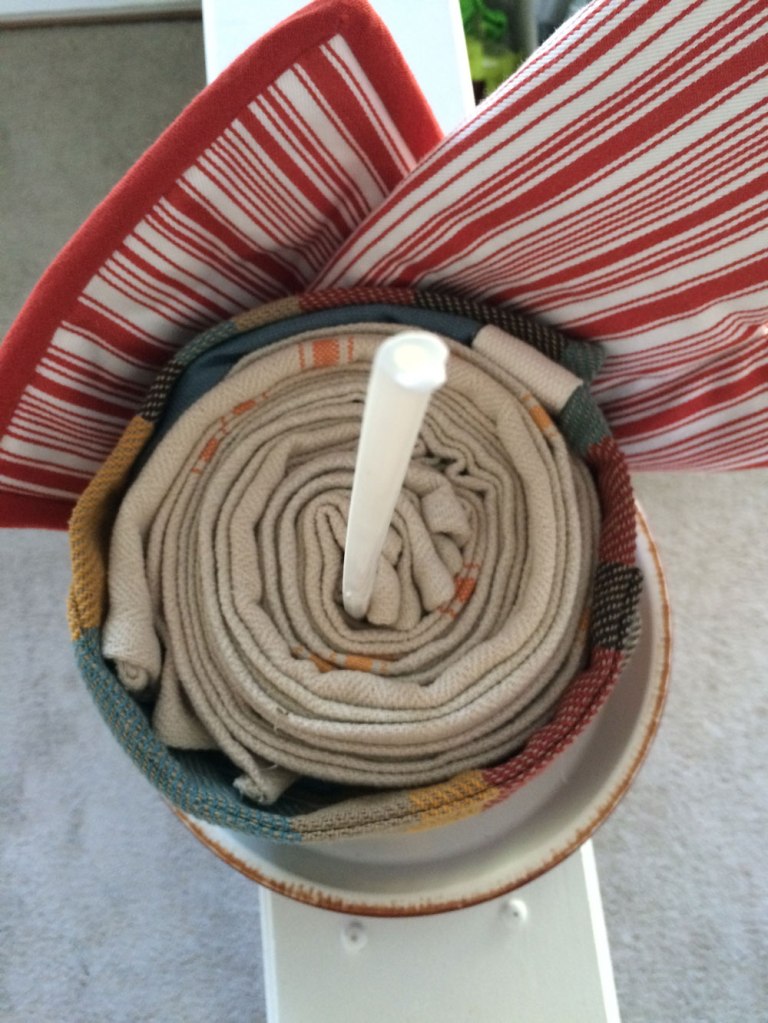 I probably should have added more towels to the bottom layer since there was such a gap between the edge of the pie plate and the bottom, but the cake was already so full of towels. I ran back out to Home Goods and picked up a set of burnt orange cloth napkins, rolled them up and stuck then around the base of the cake. 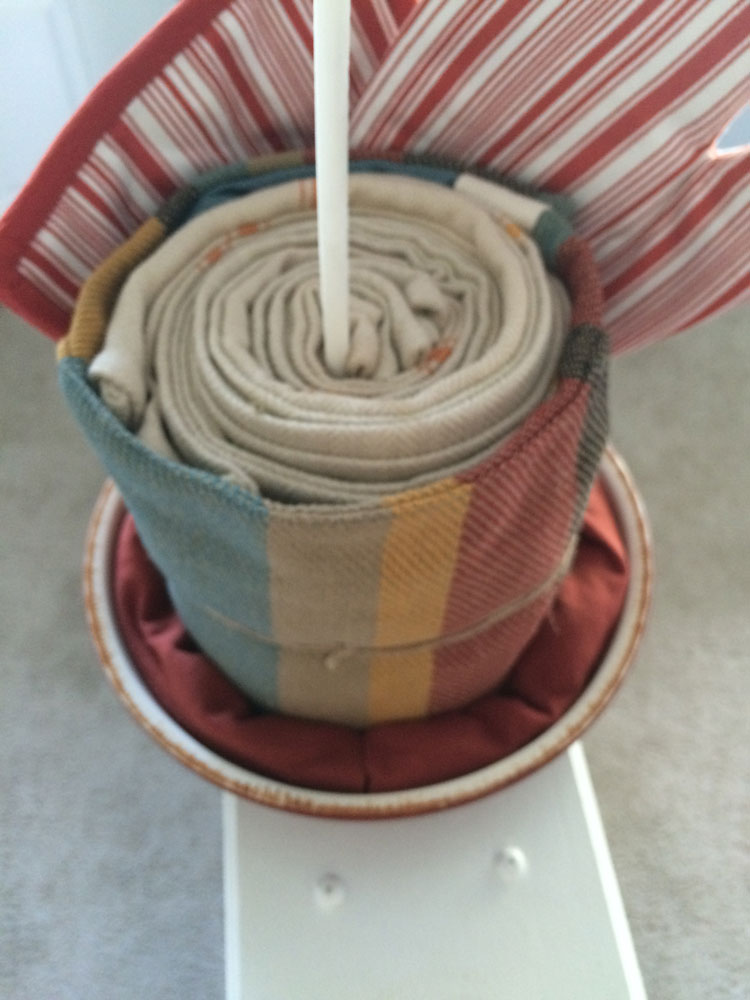 For the second and third layers, I went through the same process. Choose towels, roll towels, secure with twine. I stuck each layer onto the hanger to make sure the sizing was appropriate. Then, I took the top layer off and added the wooden spoons into the second tier of the cake. I simply stuck them into the folds of towels, then angled and shoved until they were secure and looked right. I did the same thing for the measuring spoons, too. 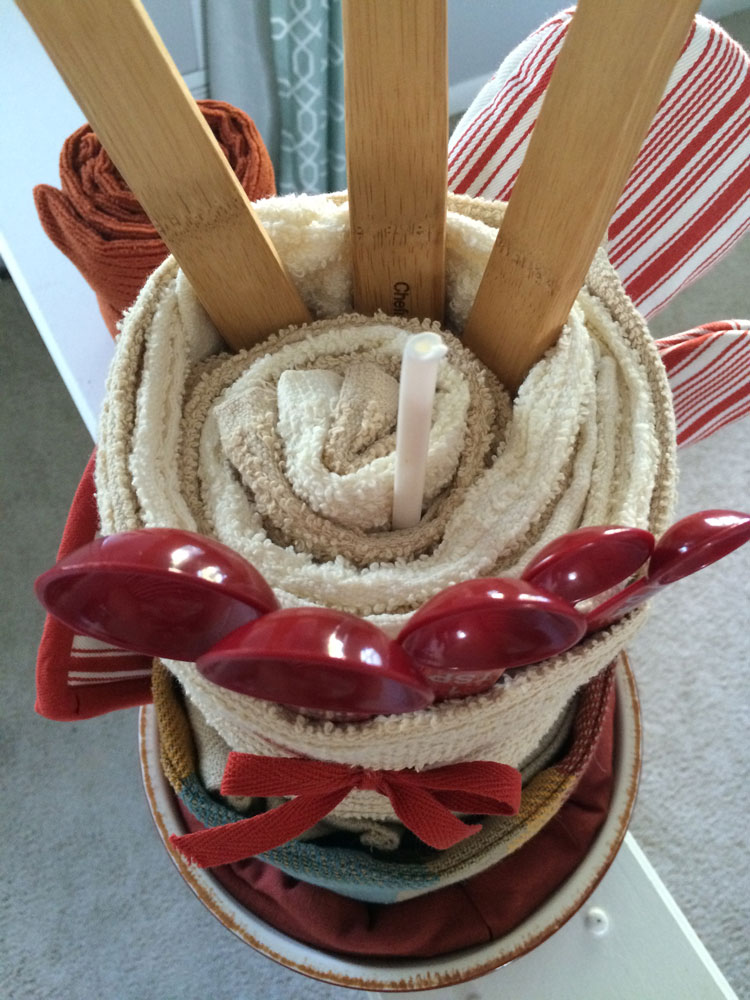 Once I was satisfied with layer 2, I added the top layer. I did redo the layers three or four times until I thought they looked right, so don’t get discouraged if your towels don’t look amazing on the first go around. 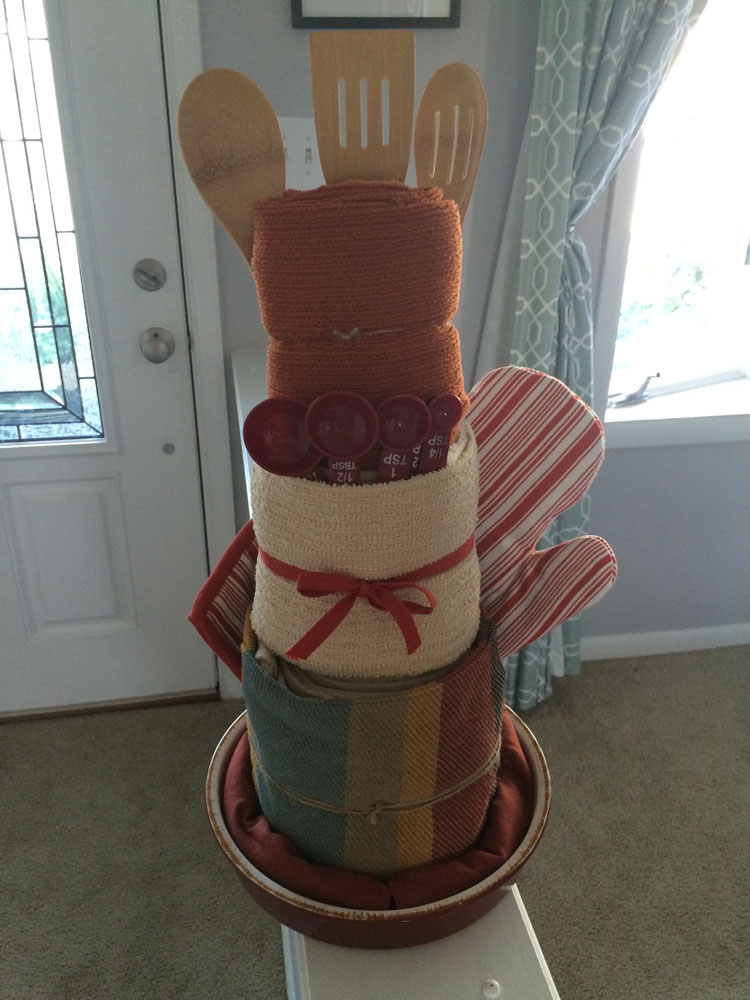 Pretty cute, huh? All I needed was ribbon to cover the twine and the cake toppers 🙂

For cake toppers, I ordered this adorable set of pumpkin salt and pepper shakers from Amazon. They barely fit on the top of the cake, so I was glad I went with this set instead of other sets that had two of the stumpier pumpkins. To make sure they didn’t fall off, I removed the stoppers (put them in a baggie or you’ll lose them!) and stuck each shaker on a skewer I’d shoved into a fold of the top tier. 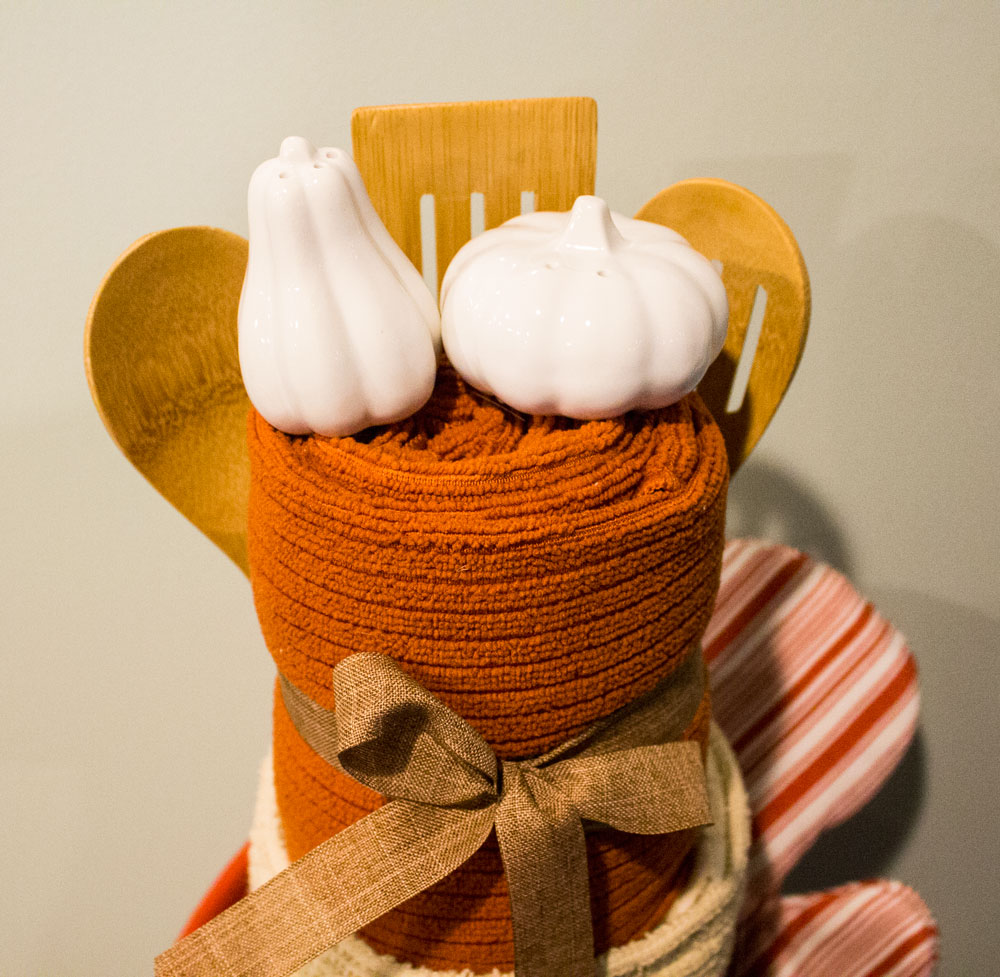 I love love love this as a gift for a shower — especially for a bride who is a baker-chocolatier-chef extraordinaire like Dana is. It was a lot of fun to make. 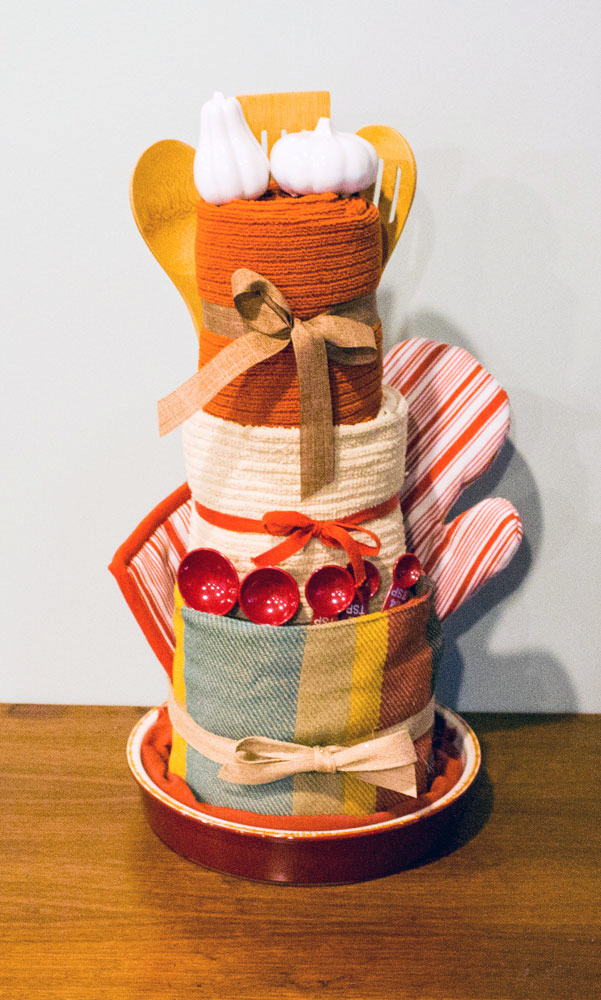 It certainly is charming, isn’t it?

What clever gifts have you made for a bride-to-be? There are so many cute ideas out there!

Oh hey, blog! Long time, no write! We’ve been so incredibly busy this past week with Valentine’s Day and my birthday that I haven’t had time to do anything but enjoy life and celebrate! I’m not complaining 😉 It’s been a great few days.

Now back to the blog world!

I had the pleasure of designing another poster for the Occasional Symphony this month for one of their upcoming events… remember the scary one I did last year?

Well this time around, the project was a little more… colorful! The Occasional Symphony is celebrating Dr. Seuss’ birthday at Port Discovery in Baltimore, Md. on March 2, so needless to say they didn’t want to scare all of the kids away with that creepy guy’s face again. Some polka dots, lots of fun colors and one topsy-turvy cake later, and their poster was complete! 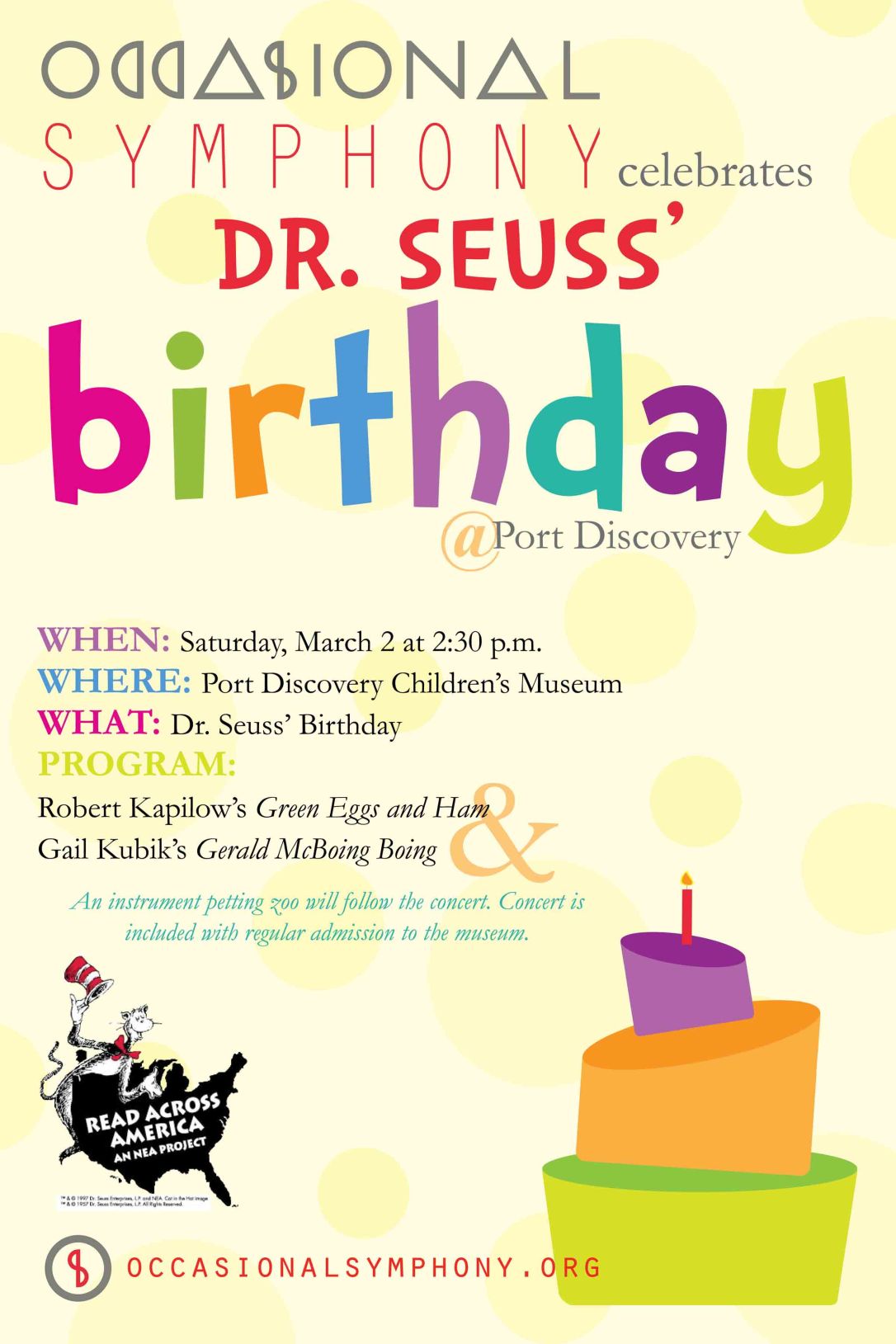 This poster we a lot of fun to do. The background is a solid yellow with a 15 percent tint to it. Then, I took other tints of the same yellow and did polka dots across the back. The colors are all awesome and bright — definitely eye-catching for little kiddos. And the font is an imitation Dr. Seuss font that I found online for free! #Winning. Best of all is the three-layer, topsy-turvy cake, which I designed myself in Adobe Illustrator. It is just adorable. I love it!

If you live in or around Baltimore and need something to do March 2, you’re welcome. I basically just planned your Saturday afternoon for you. The program should be awesome.

I’ve been working on a few other design projects: a logo for my bff’s chocolate business, and a whole bunch of goodies for a local non-profit. It’s been a lot of fun. I love me some graphic design!

Two posts in one day — holy cow! I couldn’t help myself though. Dana came over last night to give us an anniversary gift. She made our wedding cake a year ago and for our anniversary made us a mini version of the same cake. Best. Friend. Ever. 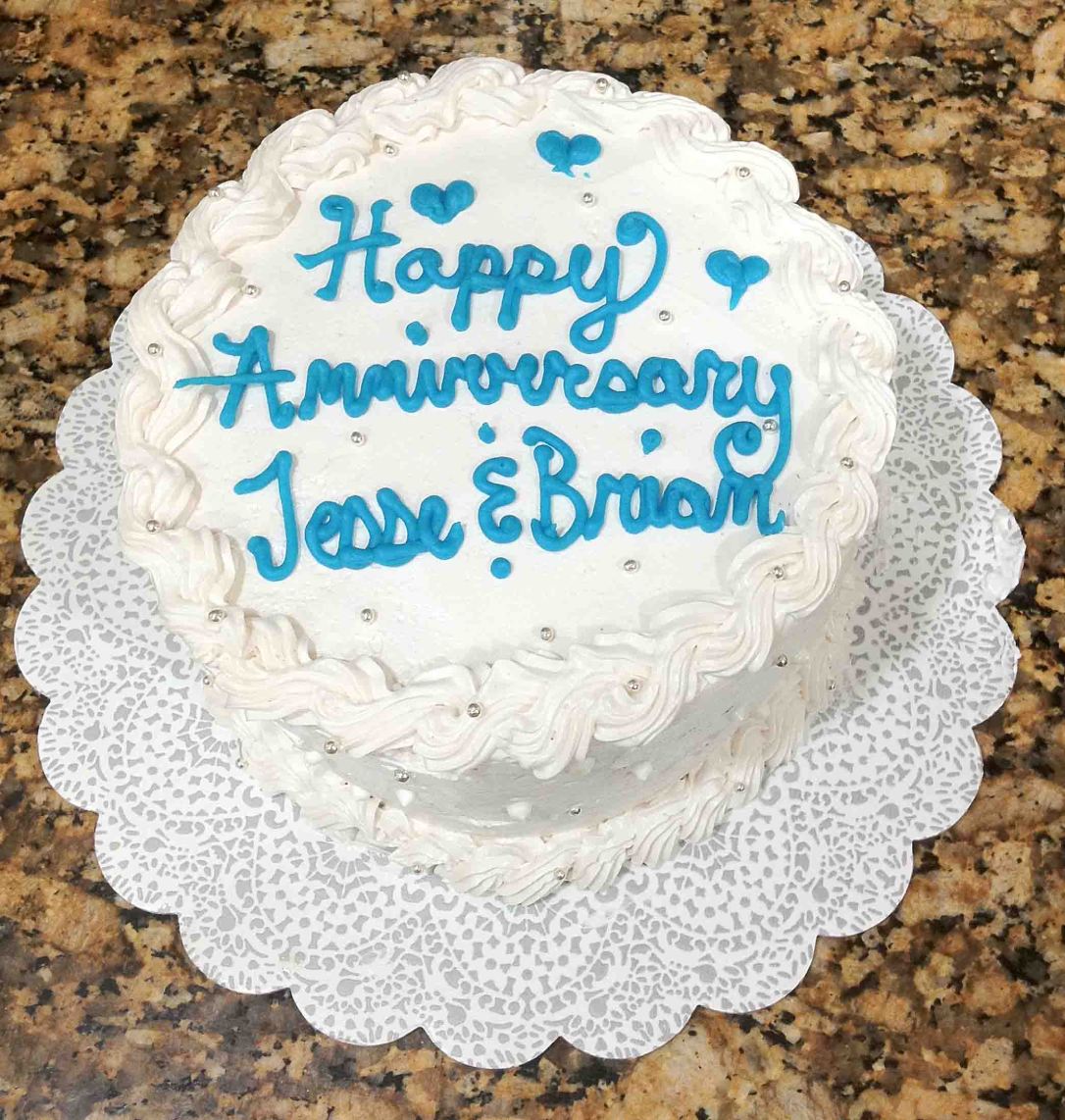 It is beautiful! I am always so impressed.

She also dropped off my September truffles: Apple Pie A La Mode and Hazelnut Orange.

They are to-die-for delicious. 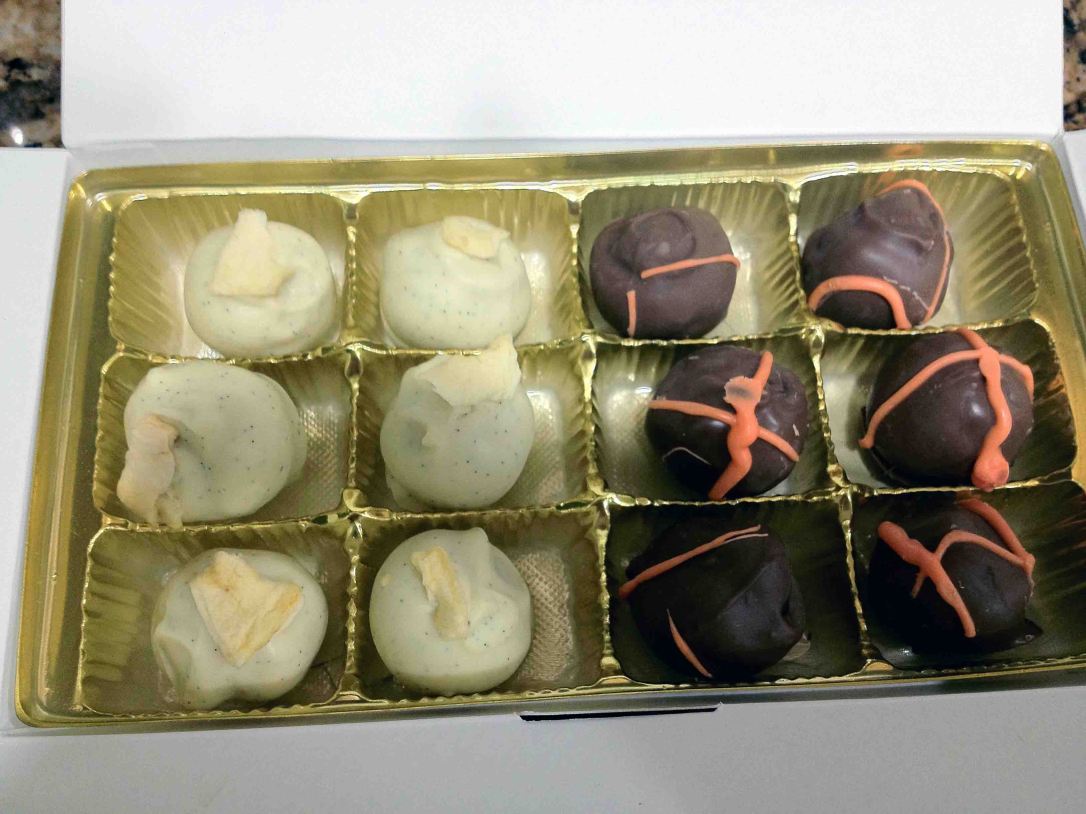 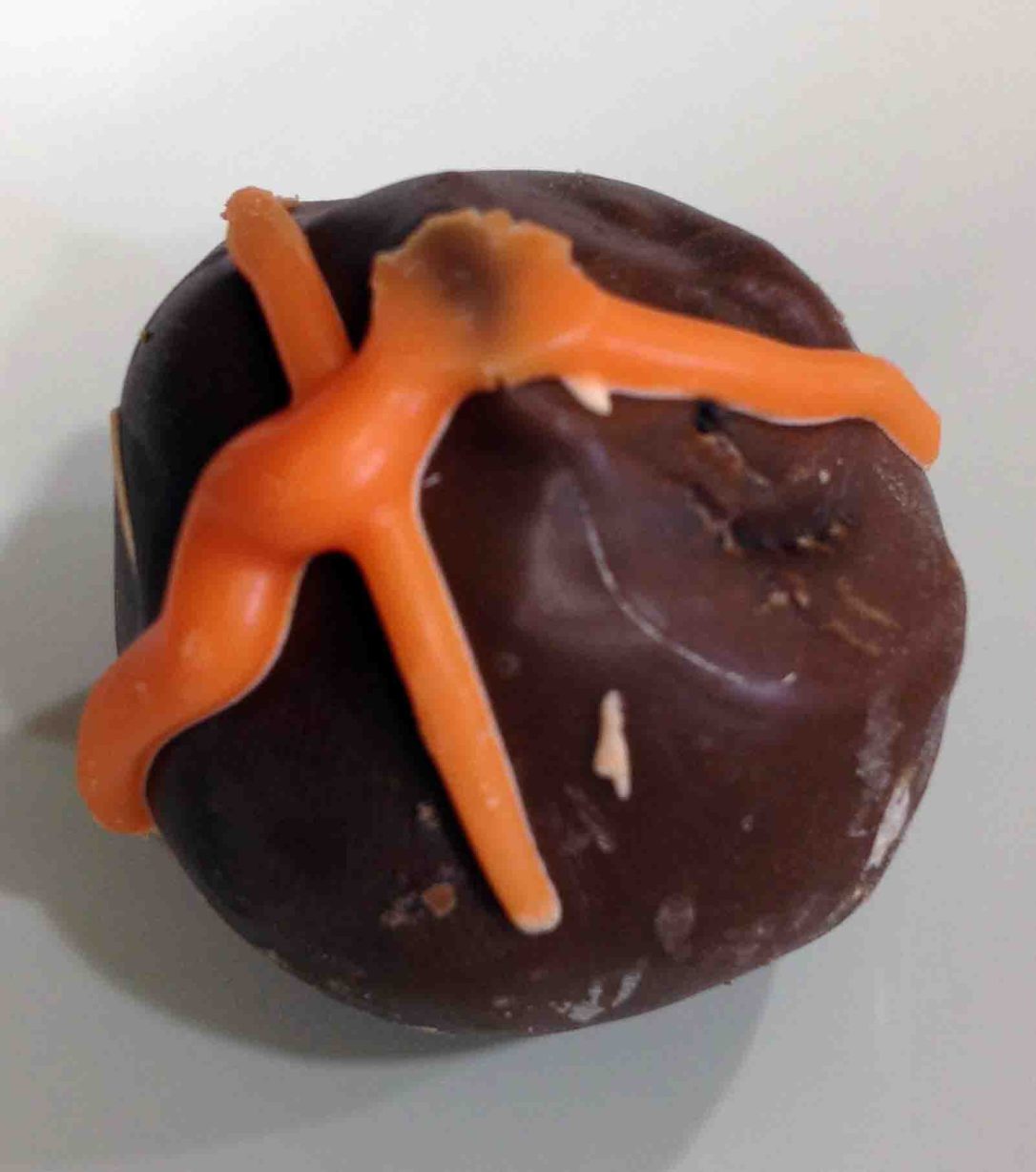 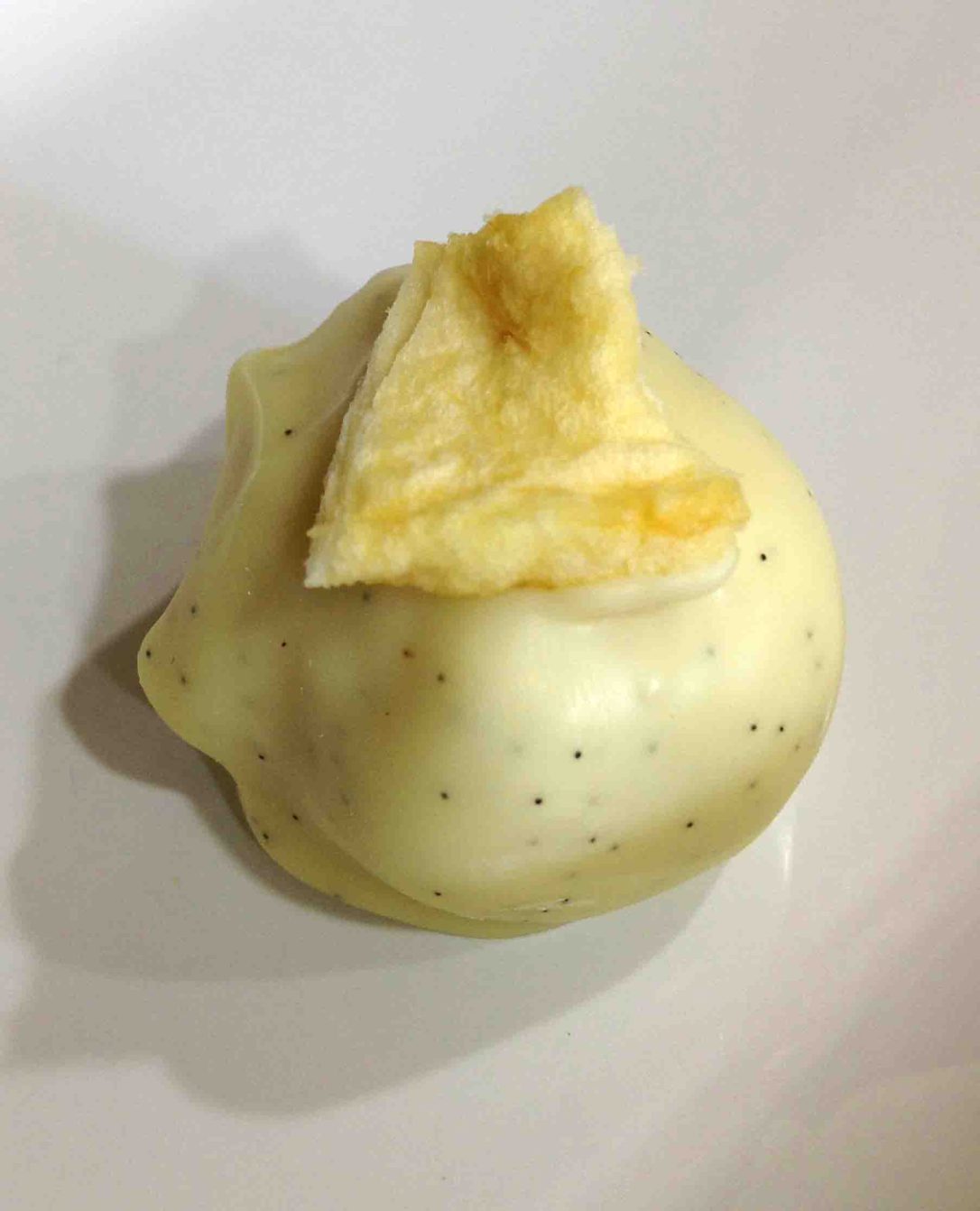